From Bourbons to Digestives: how biscuits got their names

What is a biscuit?

Biscuits are mostly sweet, small enough to be eaten with a hand, crisp (with the exception of cookies or macaroons), and consumed as a snack or treat rather than a full meal. They are not to be confused with cake: this will harden as it gets stale, whereas an ageing biscuit will go soft!

The name biscuit comes from the Latin “biscoctum”, meaning “twice cooked.” Bread was cooked twice to extract all its moisture and then, once hard, it would stay fit for consumption for months on end. The biscuit was born.

The 19th century marked a big moment for the biscuit. The endeavors of the Industrial Revolution caused breakfast to be earlier and dinner to move much later. This meant that teatime and snacking came to greater prominence.

By the First World War the sweet biscuit had become the first truly global convenience food.

What makes a good biscuit name?

Some biscuits are named after their shape and what they resemble. Others get their name from how they taste, how they are cooked, or their alleged affect on the body. Many are named after popular famous people, or the individuals who invented them.

Anastasia Edwards (author of Biscuits and Cookies, A Global History) loves whimsy in a biscuit name. Her favourite is the Snickerdoodle: a type of American cookie that is rolled in cinnamon sugar. For Dr Laura Wright (historical linguist), the snappy two-syllable names like ‘Picnic’, ‘Hobnob’ or ‘Kit Kat’ work best because they give you the sense that you can snap the biscuit into two halves.

For many of us it’s nostalgia that makes us pick up a packet of biscuits. We might remember feasting on fig rolls in front of the fire, or dunking custard creams with our grandma.

How biscuits from around the world got their names

These shortbread sandwiches with a raspberry or strawberry flavoured jam filling are a children’s party staple. The biscuit is named after the character Roger the Dodger from The Beano comics.

English biscuit company Peek Freans gave us one of our most popular chocolate biscuits. It was created in 1910 and began its life under a different name: the “Creola”. However, in 1930 it was re-branded after the ruling family in France, the royal House of Bourbon.

Wholemeal digestives were sold as an aid for digestion by Huntley and Palmers of Reading. They were prominent in adverts for the Cunard steam ships – the idea being that if you were sufficiently wealthy to go on a steam ship cruise you were going to be eating refined food that would require a digestive aid.

This biscuit, consisting of currants baked between two oblongs of dough, was named after an Italian revolutionary – yet it is unknown in Italy. The English biscuit company Peek Freans hoped to cash in on popular enthusiasm for Giuseppe Garibaldi when he visited London in 1854. Garibaldi also had a shirt, hat and fish named after him!

This brand was the brainchild of the German food manufacturer Bahlsen, who wanted to create a rival to the biscuit Petit Écolier (“little schoolboy”) that was wildly popular in France. They were first produced in 1891 and named after the philosopher Gottfried Wilhelm Leibniz who was a resident of Hanover where the biscuit company was based.

These traditional, thin and crisp French biscuits are long and slim – just like a cat’s tongue from which they get their name.

The Bath Oliver was another biscuit for those suffering the effects of an over-refined diet. It was invented by one William Oliver, a physician from Bath who treated rich invalids.

These Spanish biscuits are a kind of shortbread made from lard and traditionally eaten at Christmas. They get their name from their crumbly texture – “polvoron” is the Spanish word for “dust”.

Originally produced in the 1860s, when biscuits were becoming a sweetened commodity, the manufacturers had hoped to name these biscuits after Queen Victoria but her majesty declined to be associated with a commercial product. However, someone in the palace suggested they could be named after her favourite home – Osborne House on the Isle of Wight.

The curved Tuile biscuit, which means “tile” in French, is so named because it resembles the rounded tiles you would see on old French roofs.

This is an Italian specialty originally from Turin, consisting of two hazelnut macaroons with chocolate in between. The biscuits are thought to resemble a lady’s lips, hence the name "Lady’s kisses". 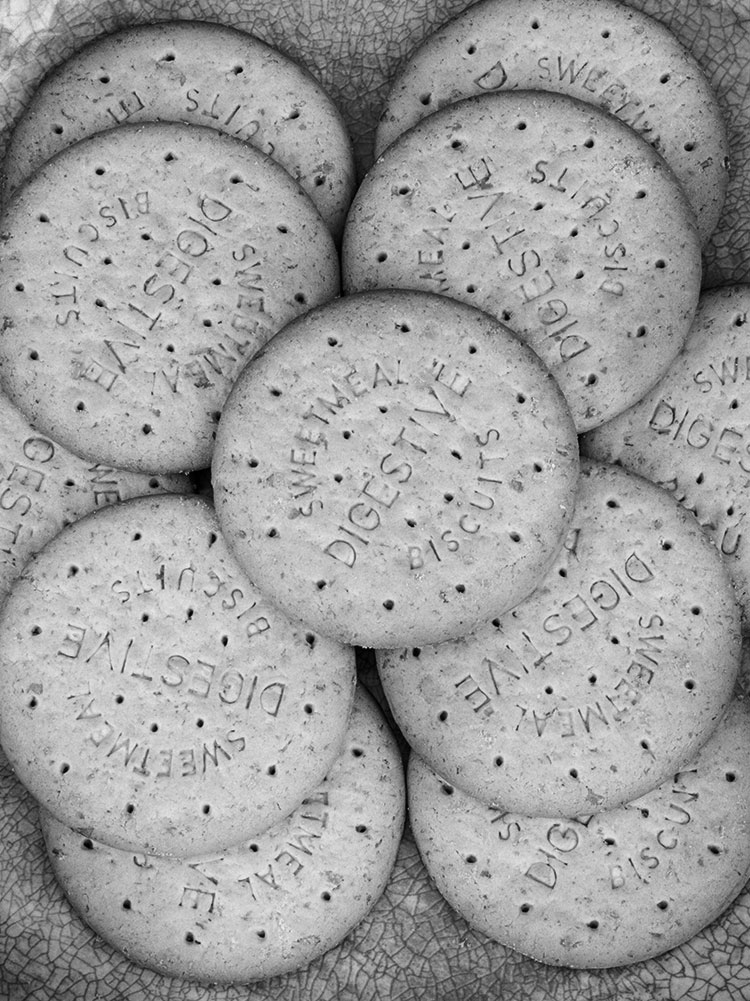